The Varsity Ultimate team had a great showing at Wednesday’s RVAL tournament, winning three games and losing one. As a result of the strong play from all team members, the team finished third out of sixteen teams in the league! The JV team also persevered through the long afternoon of four games, and despite losing its first three games, showed their endurance by winning their last game of the day. Earlier in the week, the JV Ultimate team lost to this year’s surprisingly strong White Oak Varsity 13-0. Saraphina F, Lila G, Sam F, and Talos P all had strong efforts in the loss. 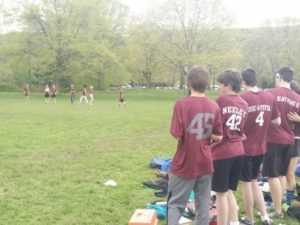