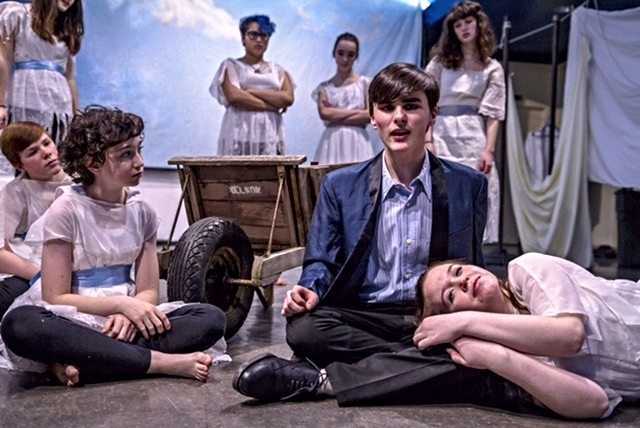 Academy students have the opportunity to participate in full-scale dramatic productions as actors, technicians, stage crew, or assistants. The annual winter show, usually staged in March, is one of the major milestones of the school year. For many years during the course of the school’s history, Academy actors worked with Shakespeare & Company of Lenox, MA. As his senior project, Will Melnick `10 directed a student production of Oscar Wilde’s The Importance of Being Earnest. More recently, Christina Gabriel (P16) and humanities teacher Neale Gay have co-directed productions of George Bernard Shaw’s Major Barbara (2014), Arthur Miller’s The Crucible, and Charles Mee’s Big Love. In 2017, Mr. Gay directed Our Town (Thornton Wilder) and in 2018, Ms. Overtree directed a modern comedy, Shakespeare in Hollywood by Ken Ludwig.

ENACHAP, CALIFORNIA. An incomprehensible event at a local play. Using interviews with witnesses, loved ones, first responders, and the investigators pursuing the case, a theatre ensemble brings the story of the strange event to life, documentary-style. But as the strands weave together into an increasingly dangerous web, it becomes clear that this phenomenon might not be entirely in the past. Unnerving, exhilarating, and wildly inventive, you’ve never walked into anything quite like Trap.