“Students here really care about what is happening in this world,” remarked Nora Bates Zale, assistant director of Admissions & Advancement and a dedicated leader of the newly founded Social Justice Council. We had been discussing the success and impressive achievements of the council in the past year. From spreading awareness about National Coming Out Day to the way women are perceived in the media, the Social Justice Council has supported the student body in understanding and figuring out ways to discuss the uncomfortable, sometimes difficult to tackle, injustices of our world. 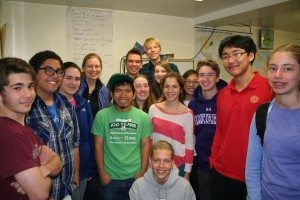 The Academy has always found ways to link students across grades and classes. At the beginning of each school year, we designate a few members of each class to join specific councils that interest them. Students from all grades unite to discuss pressing topics on councils concerning sustainability, athletics, community service, and the upholding of the Honor Code. This year we added two new options: the Social Justice Council and the Cultural Exchange Council. Both have greatly contributed to strengthening the close-knit, accepting community that The Academy has always been.

The Cultural Exchange Council (CEC) came to life when post-graduate student Tenzin Gyalpo wanted to support the school’s exchange students as part of his senior project. With help from French teacher extraordinaire Sabine Mauri, Gyalpo designed a new council with two major goals: to support exchange students while creating a safe environment in which they can share their cultures and to allow a group of students, both American and international, to join together in educating the community about other cultures. About once a month, the CEC made an announcement at morning meeting regarding different holidays or traditions from each country represented by this year’s exchange students. From these announcements, we learned about the Chinese Moon Festival, the Thai Vegetable Festival, Christmas and Hanukah traditions in Germany (which included a delicious, traditional holiday dinner), the Dutch Queen’s Day, and the Tibetan New Year called Losar. Each exchange student led the announcement regarding their culture, with help from council members of all grades.

Madame Mauri credits Gyalpo with the success of the council. He helped ensure that all exchange students felt quickly integrated as members of The Academy, teaching them about the school and making himself available as a friend and advisor. As Madame Mauri explained, “reaching out to people who need support comes naturally to him.” Gyalpo not only worked tirelessly to create the CEC, but also put the CEC’s objectives into practice by becoming a role model for welcoming exchange students into the community.

In a similar way, the Social Justice Council (SJC) helped create a safe community for discussing topics such as sexuality, gender equality, and racism. It all started with Mrs. BZ’s vision of providing a safe space for students across the grades to explore and consider these topics together. With help from first-year teachers Neale Gay and Caitlin Scudder, Mrs. BZ developed a council that would increase awareness of social justice issues. Throughout the year, the SJC hosted three round-table discussions for the student body to talk about National Coming Out Day, the anniversary of Roe v. Wade, and the UN’s Universal Declaration of Human Rights. They also invited John Willis, professor of photography at Marlboro College, to give a presentation to the whole school regarding his book Views from the Reservation, which both addresses the unjust way indigenous peoples of our country are treated and provides a stunning window into their everyday lives. This served as a reframing of mainstream Columbus Day recognition.  SJC senior Kate Mieher ’13 and honorary council members Tristan Peltenburg ’13 and Isabelle Allen ’13 encouraged the school to participate in a day of silence to recognize LGBTQ social silencing and to wear purple in support of National Coming Out Day. Finally, thanks to the dedication of Sequoia LeBreux ’16, the SJC held viewings of the documentary Miss Representation, which centers on the inequitable portrayal of women as sex symbols in the media. During this film screening, SJC students noted mentions of the documentary Tough Guise, which confronts the issue of defining manhood as violent and masculine, and then hosted a follow-up viewing of that film as well.

What is next for these councils? In the coming year, Madame Mauri hopes to increase the welcome committee for exchange students, using Gyalpo’s leadership as a model. The SJC will continue to educate students and bring new topics and issues to discussions and presentations; in fact, they’re already in discussion with volunteers at the Northampton-based Prison Birth Project to have a speaker come to campus in the fall. This year, we have all been grateful for these two new councils that expand our understanding of other cultures and current events. In a small, rural community, it is easy to assume that people are sheltered. But here at The Academy, we are given the opportunity to open dialogues about worldly issues and cultures outside of our own.