Each year the seniors at The Academy at Charlemont present their final senior independent projects publicly at the annual Spring Exhibition and privately at their individual triad meetings. The senior project is an integral part of The Academy’s 12th grade curriculum and requires a year’s worth of time and work. In spite of its impact on an Academy senior’s life, the only impact the senior project generally has on the rest of the school community is on birthday-poem quality and chore-team treat frequency, which can decline sadly in response to the critical times of senior project deadline times. Aside from a book placed in the back of the library, senior projects do not often leave any sort of legacy, and aside from the occasional survey, they usually do not require any involvement from the student body. 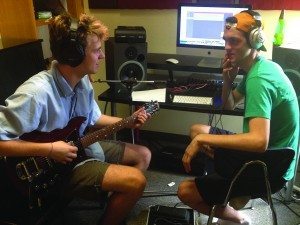 This year, however, two students’ projects promise to leave a legacy for years to come. At the end of last year Eamon Wick ’12 had finished building a recording studio in the piano practice room for his senior project. While the studio facilities are an enormous gift, there were only a few people who knew how to use them. Dana Kendall ’13 of Amherst decided to pick up where Eamon left off and base his senior project around the studio. For Dana, this was as much about learning to record music as it was about teaching other students. “Here was my trifecta of goals: to teach a recording class at Charlemont, to gain personal experience with the studio, and to leave a legacy in current students who know how to use the studio.” Dana began his studio-block recording class at the start of second semester, with a goal to teach as many students from the younger grades as possible so that after he graduates, those students will be able to teach others. He also created a written manual on how to use the studio.

Classmate Richard Selleck, of Shelburne, had a similar idea about students educating one another: For his senior project, he created a student-run tutoring program. Having noticed how often students would help each other with homework assignments, Richard saw an opportunity to design an organized system in which students could sign up for tutoring appointments with (mostly senior) volunteer tutors during free periods. He believed that senior tutors would be more effective than younger ones for their experience and knowledge. Over the course of the year, several students signed up to be tutored, but Richard sees plenty of room for improvement and hopes that students will use the framework he has set up for future tutoring programs.

Both Richard and Dana agree that the continuity of these legacies remains up to the community. For the tutoring program Richard says this means “future seniors will have to take up the mantle,” organizing the program and offering their services during their free periods. Dana hopes the students he has taught will be able to realize his vision of the recording studio as a student-operable facility similar to the photography darkroom. “I think it is in the school’s best interest that the studio remains … an outlet for creative activity.” While only time will tell exactly what effect these two senior projects will have on the school in the long term, they certainly have had and will continue to be of immediate benefit to The Academy.