Thanks to junior Adella for sharing details about and pictures from her semester abroad in Finland thus far! Learn about what Adella’s been up to below.

“My semester abroad has been in the works for a couple years. First, the logistics of the actual semester: getting a visa, finding somewhere to live, finding a school to attend, working out the details of how my trip would affect the rest of my junior year (a crucial one for colleges), and of course simply the decision of leaving home. Then, the COVID-19 pandemic hit, which delayed this semester a year. Through everything, I can absolutely say the process was worth it. My months here living with my father and going to school have been among my favorite in my life. Now, let me show you some of the things I’ve been up to here in Finland!” 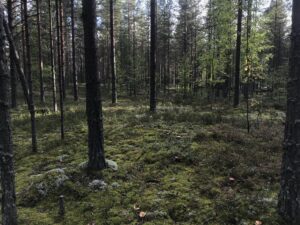 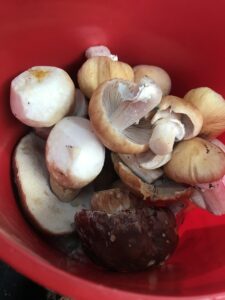 “Even though I live in a small city, outdoor activities play a large role in daily life. There is a law that is commonly known as everyman’s law which permits access to land, either public or private, to the general population for recreational access. Among the things permitted by this law is scavenging for berries and mushrooms which is a common activity for many people who live in Finland. The forest that I was in can be seen in these photos, as well as a bucketful of mushrooms that I scavenged, which my father and I later ate. As for the berries, I ate those along the way.” 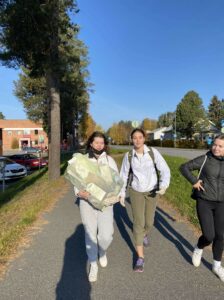 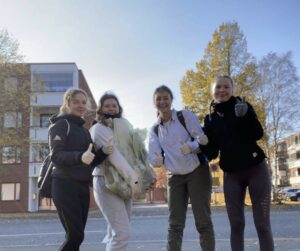 “Similar to the Academy’s Community Service Day, my school here, Lyseon Lukio, had a day where the students in the IB program went into the city and cleaned up any trash we could find. Myself and my three friends Johanna, Alisa, and Helmi collected and properly disposed of 2 bags of trash. In addition to collecting trash, we collected cans and bottles which we returned at the end of the day. All of the IB students pooled the money that we made from returning cans (which amounted to about 30 euros) and donated it to an organization which helps to clean up the oceans. In the photos here are the four of us walking back to school with our trash and a quick photoshoot we took along the way.” 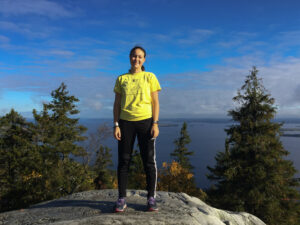 “This photo is one of myself representing the Academy with last year’s community service day shirt on top of Ukko-Koli in Koli National Park. The water behind me is a part of a lake called lake Pielisjärvi which is 75 miles long but very narrow. This sort of lake is entirely common in Finland. My father and I spent the day hiking at Koli National Park which is about an hour away from the city that we live in, enjoying the views and the time outside.” 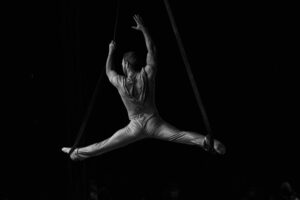 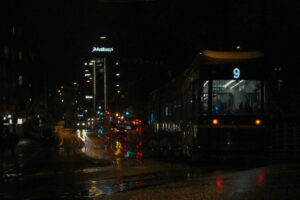 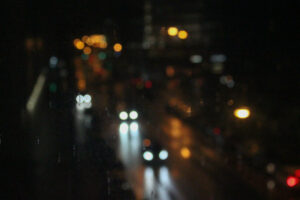 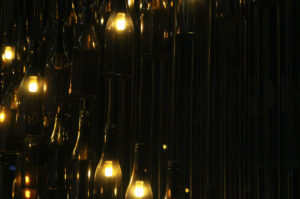 “I’ve been having a lot of fun doing different kinds of photography here. The first week I was here, a circus came through the city and I got to take photos of the acrobats. On a stay of a couple of days in Helsinki I got to photograph the city lights. Though I don’t have my preferred editing software here, I think they’ve come out quite well!” 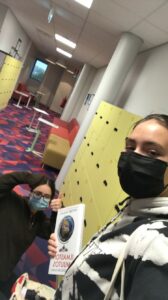 “I’ve befriended a fellow exchange student during my time here, her name is Fran and she is from Chile. It’s been a lot of fun bonding with her over the shared experience, despite the differences in the places from which we have come. During our Finnish lesson Fran and I took a book about global warming written in Finnish with the hope that someday we would be able to read it. Fran and I with our books are portrayed in the photo above.” 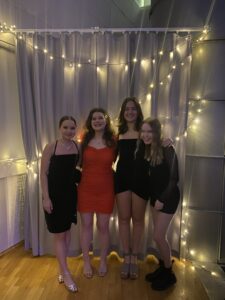 “In honor of Lyseon Lukio’s 155th anniversary and the 20th anniversary of their IB program, the school threw a party for all of the students. As the occasion was semi-formal my friends and I got dressed up, as can be seen in the photo.” 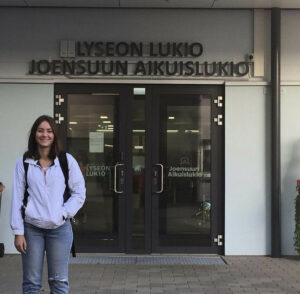 “Finally, as many teens endure, my father came along to school with me on the first day to take a photo of me in front of the entryway to one of the buildings of the school, a classically mortifying experience.”

“My months here have given me global perspective, and this has been a trip of self discovery as well. I urge anyone who has the chance to do something even remotely similar to this, to take that opportunity. Whether it be for a year, or a couple weeks on a Network of Complementary Schools exchange visit, these types of experiences can be life changing in the most positive way. I have 6 weeks left here, and though leaving is already beginning to weigh heavy on me, I look forward to every second that remains.”