On Tuesday, the co-ed JV soccer squad hosted and defeated Berkshire Christian School by a score of 6-4.  Atticus R had four goals, while Anders G-B and Charlie P each found the net once. Charlie P and newcomer Julien T-C had assists.  Sisters Anna and Emmy P-C had strong games on defense. The team showed significant improvement on defense and in their passing. Gus G and Anders G-B shared the goal-keeping duties, making eight and six saves, respectively. On Wednesday, the girls’ Varsity soccer team tied Dublin 2-2, a huge success for the Aardvarks! We began the game playing tough defense as well as aggressive offense. After being down 0-1, Ruby C scored an amazing goal! With no breaks and no subs, the team truly showed their ability to persist against a tough opponent. In the second half, Calla J scored with a penalty kick, a great shot straight to the bottom left corner of the goal, bringing the score to 2-1. At the end, Dublin had a shot that arced up over the defense, and just under the crossbar, to tie the game. Everyone had a wonderful game, playing with good spirits and powerful energy! The girls played a tough match against Four Rivers on Thursday, in a 3-1 loss. They had six incredible shots on goal, including a score by Calla, assisted by Elaina G-B. Goalie Gwen H saved three tough shots. Anna P. had an awesome play on defense. The boys’ Varsity squad defeated Dublin 8-5 at home on Wednesday. Nat B-O, Harper W-W, Tucker Z-A, and Nico V all had two goals apiece, while Nico V (2), Charlie P (2), Bennet B (2), and Nick C contributed assists. Starting his first varsity game, Alex T had a nice game in goal. Finally, though their meet was cancelled this week, the Cross Country team continued to train while braving heat and rain. Speaking of aardvarks, thanks to the Academy Parents Council, we have a new mascot, modeled here by Eli C. Go teams! 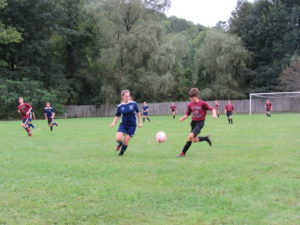 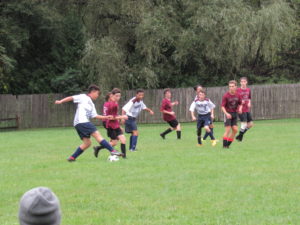 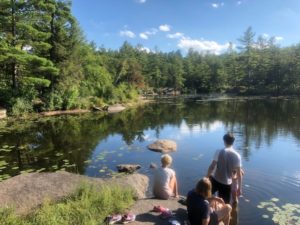 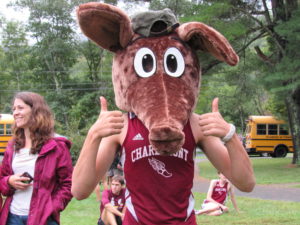