The Girls’ JV Soccer team won on Tuesday against The Center School by an impressive 11-0 score.  The players were in positions to which they weren’t all accustomed but they played amazingly, working on back passes and crosses at goal. Elaina Gibb-Buursma scored an impressive 5 goals in her first game back from an injury. Tess Marini-Rapoport scored her first 2 points of the season, with Corrine Laird, Ruby Chase, Celeste DiLeo, and Eliza Bigelow (her first too!) pitching in a goal apiece. The defense played extremely well and kept most of the action on the Center School’s half with Ruby Chase and Juliet Corwin playing well in goal. The girls practiced excellent sportsmanship and team spirit in their last JV game of the season.
The Boys JV Soccer team lost 9-2 to Four Rivers on Tuesday. Raymond Mossman scored the team’s two goals, while Alec Draxler had a great game as an aggressive striker. Nick Hallenbeck, Zander Frangie, Sam Rancourt and Tor Olsson were strong on defense, and Nick Forbes played an energetic game at midfield.

The hiking group embraced the cold weather on Tuesday to hike to the summit of Mt. Monadnock. They enjoyed snow flurries and views of Boston from the top.

The Cross-Country team traveled to Stoneleigh Burnham on Wednesday for their last regular season meet. Running for the boys were Patrick Osborne (32), Jeremy Forbes (36), Kyle Mayer (37), Grayson Rizzi (42), Eli Catanzaro (43), and Seamus Turner-Glennon- (57). For the girls, Michaela Lindsey finished 36th and Katie Tobits came in 42nd.
The Girls’ Varsity Soccer team finished their season with a 7-0 loss to Dublin in an RVAL quarterfinal game. Lila Goleman played a great game in goal as she was helped by a strong defensive effort from Nellie Boyd-Owens, Eliza Bigelow, Corrine Laird, Sunta Corciula, while the offense was led by Ella Deters, Zell Goleman, Saraphina Forman, and Elaina Gibbs-Buursma.
In a River Valley Athletic League quarterfinal game, The Academy boys defeated The Hartsbrook School 7-6. Goalie Kyle Nitzsche had 10 saves in goal, including one on a penalty kick right in front of the goal. Hartsbrook went up 3-1 before Charlemont came back behind Aiden Brenizer (3 goals, 2 assists), Nat Boyd-Owens (3 goals), and Sam Fisher, who was assisted by brother Liam Fisher. Tucker Boyd, Sam Zakon-Anderson, and Jaromil Topolski played phenomenally well on defense for Charlemont. The boys take on Dublin at home at 3 PM on Friday, October 28. 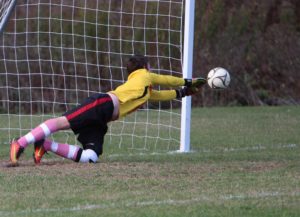 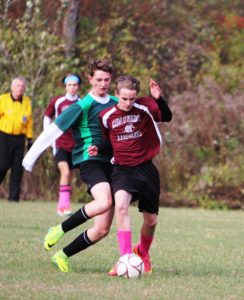 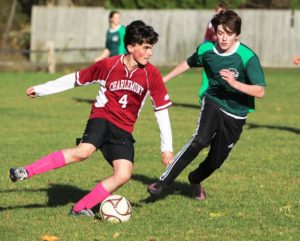