Girls soccer players had an active week that started with a 3-1 victory over PVCICS on Tuesday. Anna P-C had an outstanding game that included scoring a goal. Additionally, Greta M and Ella D scored goals, and Ruby C had an assist. Linnea Z and Esme M-R also made great contributions to the victory.  The girls varsity team lost 7-0 to Dublin on Wednesday, but the team showed impressive grit and effort on a hot and sunny field against a physical opponent. On Thursday, the girls came out strong against Four Rivers with Elaina G-B scoring in the first half before Four Rivers came back to win 2-1.

The boys varsity defeated The Hartsbrook School 5-3 behind Hendrik P’s hat trick and one assist on Monday. Nat B-O scored and had one assist, Harper W-W scored, and Sam R had one assist.  The boys also had a great game against a tough Dublin team on Wednesday, tying 3-3. Tucker Z-A scored all three goals and Kyle N had a strong game in goal that included a crucial penalty kick save. Sam F, Liam F and Winston P provided a great defensive effort.

On Tuesday, the JV boys soccer team was defeated 11-1 by a talented and older group from the Pioneer Valley Chinese Immersion Charter School. The Aadvarks only goal came in the second half on a nice shot by Atticus R with an assist from Tor O. Despite the score, Alex T played well in goal, making numerous saves.  Other notable performers included Nick C and Sam R on defense, and Charlie P and Raymond M on offense.

The cross-country team had a good showing in the first race of the season. Eli C (22nd out of 55 male runners) led the way for the boys with Patrick O (24th) close behind. Leo W and Izzy S had nice runs in their first X-C races, and Seamus T-G rounded out Charlemont’s top five. Katie T ran a strong race as the only Academy girl, finishing 25th out of 38 females.

The Academy hiking club has been active in these first two weeks of school. Destinations have included McLeod Pond in Catamount State Park, Twin Cascades at the Hoosac Tunnel, and a steep ascent of Negus Mountain. 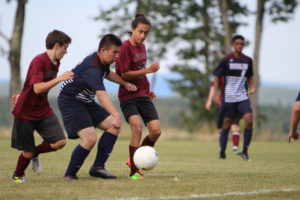 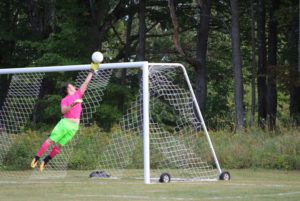 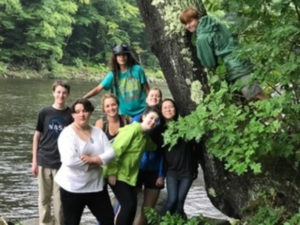