Mr. Gay’s 9th grade Humanities class has been studying ancient Greek rhetoric by using Thucydides’ The History of the Peloponnesian War as a guide. As a class they analyzed Pericles’ Funeral Oration from Thucydides, and also Thucydides’ famous “Melian Dialogue.”

The tiny island of Melos is the setting for the dialogue. Here, Athens has surrounded the neutral Melos with its infantry, cavalry, archers, and navy. The Athenians have given the Melians an option: surrender to us and join our empire, or perish at the hands of our superior arms. The Melians try to appeal to the Athenians’ better nature, but Athens persists in its insistence that the strong do as they will and the weak do as they must.
Mr. Gay’s 9th grade broke into a group of Melians and a group of Athenians. Taking what they learned from class, they prepared the Melian Dialogue in their own words and presented it to the 8th grade, with the 8th graders acting as the citizens of Melos. The 8th graders then debated whether they wanted to submit to Athens. They decided that death was preferable to dishonor, just as the Melians did in 416 BCE! 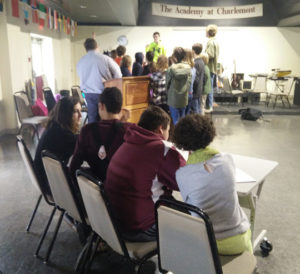 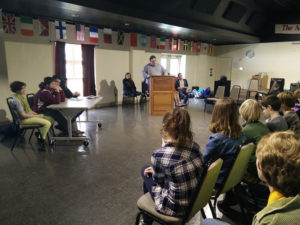