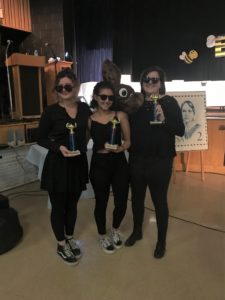 Academy students and educators participated in the 13th annual Mary Lyon Spelling Bee at Mohawk Trail Regional Middle and High School on November 29th. The faculty team, captained by Donald Young and assisted by Cathy Valdez and Neale Gay, put up a valiant effort and were the last team eliminated in their round. They were eliminated on “furfuraceous”, which is an adjective that apparently means “covered with or characterized by branlike scales”. The student team, comprised of the equally capable seniors Sophia C, Lila G, and Leni S-F, fought valiantly and defeated five teams from Mohawk Trail Regional High School to win the student round.