This year we’ve been fortunate to have a number of alums visit us on campus.
After graduating in 2004, Hunter attended Georgetown University in Washington, DC, where he studied history, languages, and the arts, finally setting on a major in the performing arts. He was one of five students in the first graduating class of Theatre majors at Georgetown, and he remained in the city for six years working in professional theatre. His full-length plays include Freud Meets Girl (about a machine that reads dreams), Tell-Tale (a story about a blood transfusion that riffs on Edgar Allen Poe’s “The Tell-Tale Heart”), and Unplugged, which follows the late Nirvana musician Kurt Cobain through his first year in Heaven.

While in DC, Hunter also ran the nonprofit arts workshop Artists’ Bloc, where he helped to develop young artists’ musical and dance pieces, worked on the management level at several downtown playhouses, directed numerous shows, and wrote more than 200 articles for DC Theatre Scene and American Theatre magazine.  Now back in Western Mass, Hunter has been taking a break from theatre. He currently works as a staff writer for the Valley Advocate newspaper, where he reports on arts and culture, music, food, politics, and a wide range of local current events.

In October, Zoë Plakias ’04 joined us by Skype from Davis, CA where she is completing her PhD in Agricultural and Resource Economics at the University of California, Davis. She studies agricultural producer organizations in the United States. She is currently working on her dissertation and exploring academic and non-academic job opportunities beginning in Fall 2016. She attended Whitman College (Walla Walla, WA) for several years and worked on tall ships as a crew member and educator in sail training and environmental education programs for several seasons before getting her B.A. in Economics from Western Washington University (Bellingham, WA) in 2010.  Students learned quite a bit from talking with Zoë (and we all learned quite a bit about navigating Skype in a group setting)! 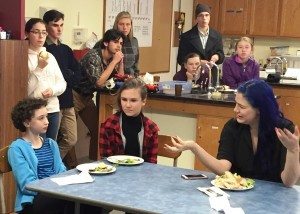 In November, Sarah Banks Hartshorne ’05 joined us after visiting family in the area for Thanksgiving.  Sarah went to Boston University, then transferred to Drew University in order to be closer to New York City after being a contestant on America’s Next Top Model. She graduated from SUNY Purchase after taking a few years off from college to pursue modeling full time. She worked as a model for seven years.  Sarah was on the cover of Vogue L’Uomo, did commercials, campaigns and print work for many national and international brands and magazines. She also started doing standup comedy – in fact, her senior project involved a stand up routine!  Two years ago Sarah married fellow Academy alum Ian Leue (’03) in Colrain. One year ago she “retired” from modelling and now works full time doing comedy and production.  She’s the vice president and head of production at a nonprofit called Project UROK where she produces comedy videos for teens and young adults struggling with mental illness.  Over 35 students spent the lunch hour with Sarah, enjoying her humor and her insights into the worlds of modelling, comedy, and – both poignant and inspiring – her efforts to destigmatize mental illness through humor. 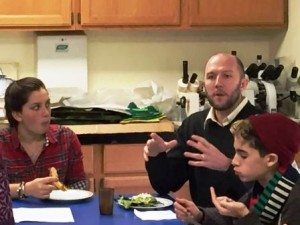 Kipp Sutton ’90, also visiting family and friends in the area, stopped by The Academy to talk with students about his work as a Foreign Service Officer for the US Agency for International Development (USAID).  His areas of technical focus are Agriculture and Economic Growth and his main responsibilities are to design and manage development projects in coordination with host-country governments.  Kipp currently lives in Bangkok, Thailand with his wife and two daughters. Previously he worked for USAID in Nepal and Afghanistan. After graduating from Middlebury College and prior to his work with USAID he served in the Peace Corps in Bolivia, Paraguay (where he met his wife), and Mongolia.  20 students and several faculty and staff members joined Kipp to hear about how his time at The Academy, the mentorship of Senora Jane Grant, his connections with another Academy family with Peace Corps experience, all influenced his educational and career choices.  We learned about his not-so-secret passion for beach volleyball, a pursuit he honed during the years before graduate school at UC Davis.  In addition, Kipp spent some time with the 9th grade Biology and 7th grade Geography classes, adding some real world perspective to their studies.
In mid-April, Academy alumnus and film director Galen Knowles presented a screening of his movie Far From Home along with the subject of the documentary, Brolin Mawejje. The program was sponsored by the Arts and Athletics Council and included a conversation with Galen and Brolin about the life experiences and interests that brought them together to tell this fascinating story.

In April, Rosie Marsters ’10 took time out from her schedule as Legislative Director in the office of Massachusetts State Representative Stephen Kulik to have lunch with students and some interested current and former faculty members.  Rosie described how the opportunity to work on the campaigns of Representatives Kulik and Paul Mark led her to change her college major to Political Science, and then to a post in Mr. Kulik’s district office handling constituent relations.  Last year she moved to Boston as a Legislative Aid and was appointed Legislative Director in September.  Thanks to Rosie for sharing her story!
Academy alumni/ae, please contact us with your interest in participating in the Lunch with an Alum program in the future.  We’d love to welcome you back to campus!