As we continue to work on finding ways to support student interests through council initiatives, we wanted to share what our 6 leadership councils have been working on so far this semester:

The Arts & Cultural Exchange Council has formed subcommittees to tackle their agenda. Students have decided to continue successful initiatives from last year, including soliciting artwork for the Weekly Art Corner, playing music from around the world and in a variety of styles during Wednesday lunch periods, and finding ways to celebrate different cultures, including plans for a German Christmas & Hanukkah lunch feast on the docket for December.
The Community Service Council has begun a change drive to raise funds for hurricane relief efforts (particularly those in Puerto Rico), challenging each team to raise as much as they can. They are also working on preparing for a 3D printing initiative in which they will collaborate with an online organization that provides files to print that generate prosthetic limbs (mostly hands) for individuals who need them.
The Health & Wellness Council is reviving initiatives that they began last year, such as planning for “Stress Fest” (a series of stress management activities to take place around exams). They have also created RICE (rest, ice, compression, elevation) posters for the locker rooms to remind student athletes about proper injury protocol, as well as starting a new tradition of taking walks together to the Upper Field. There are also nascent conversations about building a greenhouse for the school.
The Honor Council spent the first month of the school year discussing and planning how to introduce the Honor Code Signing. We decided that small groups might lend towards discussion more than a whole-school gathering. We produced four leading questions and partnered with seniors to lead discussions prior to signing. We are brainstorming events, campaigns, and ideas to be a positive presence to the school.
The Social Justice Council has nearly completed their first project of the year, selling almost all of our 100 signs in support of the Hate Has No Home Here initiative (still looking to find homes for the remaining 10+!). Students are also interested in creating some campaigns in which they encourage community members to contact members of Congress about defending the existence of DACA (Deferred Action for Childhood Arrivals ), as well as contacting FEMA to encourage getting aid to all hurricane-affected communities in Puerto Rico, as we learned that non-tourist, more remote areas of the island have not received any aid. Finally, council members have discussed doing another youth conference (building on the momentum from the Walking the Talk for Racial Justice Conference of last May) as well as starting a series of documentary movie nights in which they would raise funds for a cause related to the topic of the film shown.
The Sustainability Council has generated a list of several projects for the year, with an overarching goal of communicating with the school community more about how we use our resources (such as electricity, water, etc.). A few ideas have percolated, including purposeful consideration of how we source and use paper as a school, as well as an idea about planting apple trees on campus towards creating more homegrown food for community consumption. 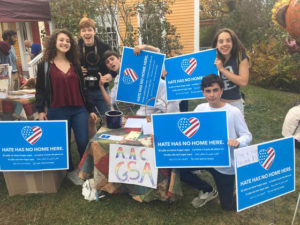